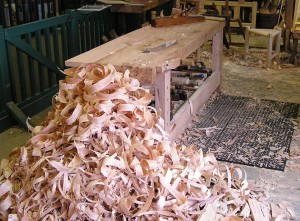 Lets make one thing clear: I was certainly not expecting to be writing this blog entry this week.  I had a lovely little piece on some preliminary reports that showed the shavings (only garnered from boards planed with a #365 Stanley Jointer plane) from 3000 year old, spalted, birdseye, curly, Spanish, aromatic bubinga cured CANCER.  I had to hit the delete key, however when two things happened: 1) The world’s supply of the wood was used up in a single woodworking project, and, more importantly, 2) The MonkWerks YouTube channel hit 1000 subscribers!

In all seriousness – Poor, poor man, when you have to start a sentence that way, you’ve lost the ability to speak ‘in all seriousness’ – I want to thank everyone who has subscribed and watched my videos.  I posted my first one 5 months and 1 week ago and it has been a lot of fun doing the projects and interacting online with a lot of interesting people. – Should we remind him that he said he would be putting out videos twice a month? – (I heard that!  Filming AND doing the woodworking is a lot harder than I initially thought.  Cut me a little slack.)  Sorry about that, trying to keep the minions under control.  There are several online woodworkers who have promoted my channel and I owe them a debt of gratitude.  In particular is Steve Carmichael, Tom Iovino, John Heisz, Jay Bates, and David Picciuto; a big thank you to all of them.  But I am also thankful to you, my subscribers, when you view, comment, and like the videos it is a nice reminder that someone appreciates my style of woodworking – ‘style,’ I suppose that’s one way to say it.

I made a short video, which is posted below.  It contains some information about a 1000 subscriber, thank-you giveaway, so check it out to see how to be involved.  One last thing: Blog readers, you have some catching up to do.