There is a saying in my line of work that one of the problems is that sophomores think they know everything.  They’ve been there a year, so they’ve experienced it, but they haven’t had the responsibility yet to know when they are wrong.  I think anyone who has taken the opportunity to put their work out in the public arena has come across somebody that took issue with the WAY you did what you did.  In the ever-expanding lexicon of the internet, these people can often be labeled as trolls.  I bring this up because some people (I guess that would be me speaking tongue in cheek) have claimed to have discovered the source of knowledge for the ever-present Maker Troll.  And for that we can thank …

Disney and General Motors.  That’s right, in 1945 the soldiers and sailors of America were introduced to Primitive Pete and the right way to use tools in this little gem,

“The ABCs of Hand Tools,”subtitled “Their Correct Usage and Care.” (Queue the suspenseful music)  In its original form it was meant to train the mechanics of the armed forces, who came from a variety of different backgrounds or no mechanical backgrounds, to have a standard way of taking care and using the tools that were purchased with War Bonds to defeat the Fascists (which given the political climate, let me be clear, I mean fascism as in the Hitler and Mussolini variety). In 1968, it was slightly adapted and collated with a snazzy Disney cartoon for distribution in high school shop classes throughout the United States AND the World. (Okay, maybe not the world, but that makes it flow nicer.)

History lesson over … my thoughts/review of this book … I’m giving it an arbitrary and subjective rating of 4 out of 5 saw blades.

Why? Very simple, a 5 saw blade rating requires a plot.  And this book just ain’t built that way.  In the introduction we are introduced to a history of tools, “Thousands of years ago Man had no tools but his bare hands.” (And for my feminist friends out there, yes I have a few, I did not add the capitalization.) “But one day somebody – and you can be sure it wasn’t the strongest man in the tribe – discovered with a stone fastened to the end of a stick he could strike a harder blow …” for Truth, Justice, and the American Way. But just as we’re learning how all of modern civilization is the result of better and better tools, we’re introduced to our, what should we call him, our anti-hero.

Primitive Pete is the bumbling idiot who can’t use a tool correctly to save his life, and if the illustrations are anything to go by, I have no idea how he was still alive at the end of the book! We have no real backstory for our main character nor his motivation – a more astute critic than I might call that sloppy writing – but by the end I just want to look past all of that because you can’t help but love this adorable little troglodyte by the end of the book. 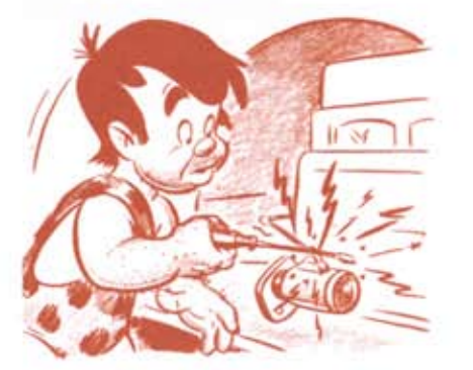 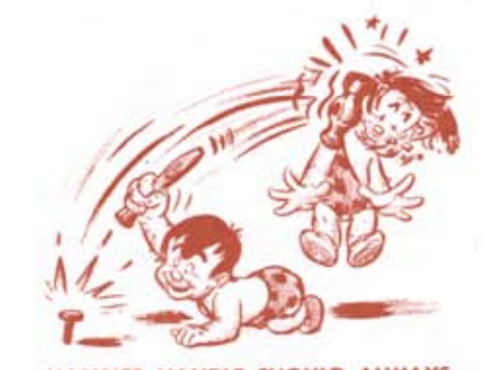 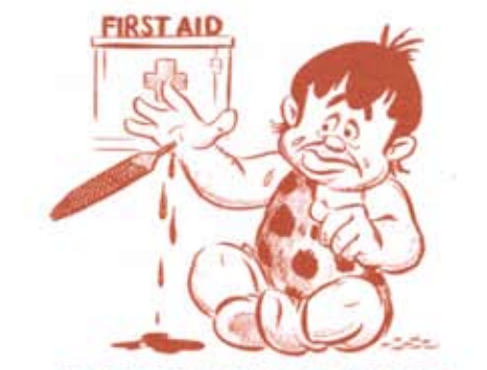 The book itself is divided into, as I counted it, 13 sections: screwdrivers, hammers, pliers, wrenches (I think the author was bordering on a fetish with wrenches), chisels, punches, files, hacksaws, feeler gauges, steel rules, micrometers, screw extractors, and one section devoted all to itself “Carpenter’s Tools.”  This book makes no apologies about it, it’s for a mechanic’s shop. The author explains this section’s inclusion however, “Every mechanic has to use some of them occasionally.”  Well, I sometimes have use for mechanics tools, so there 😛

The meat and potatoes of each section is a description of the various tools, standard sizes, how their dimensions and geometry are important, proper care and maintenance of the tool (I am certain the author lives by the motto: Cleanliness is Next to Godliness), and of course how to correctly and incorrectly (demonstrated by the stunningly, lovely, Primitive Pete) use the tool. To give you a little flavor of this meat and potatoes, in the section on hammers, or should I say ball peen hammers, they come in 4, 6, 8, and 12 ounces, as well as 1, 1-1/2, and 2 pound sizes. The author is also kind enough to inform us that “a good combination to have is a 12-ounce, 1-1/2, and a 4 or 6-ounce.”

And though I probably don’t need to know that the angle from the body to the opening of an open-end wrench is either 15° or 22-1/2°, but it is nice to know that the purpose of doing that is so that in tight quarters you can, and this is a technical term, “flop” the wrench over, reattach it to the nut and continue your swing. (I heard the “flop-ping trick” was illegal in 12 states.)

But the bubbling fountain of troll wisdom comes in each chapter on how not to use a tool … providing us with examples of not using a screwdriver as a lever, never putting a pair of pliers to a nut for the purposes of tightening or loosing it, nor attempting to apply pressure on the moveable jaw of an adjustable wrench.  If you’re thinking that the book is simply a list of don’t dos, fear not because it’s not like Sr. Mary Ignatius of the Perpetual Bad Day’s first grade lecture on the Ten Commandments.  The book is mostly interested in how properly to use those tools.  A lot of it is simple wisdom, such as making sure that your screwdriver is appropriately sized for the slot. As that is the bulk of the book, I don’t want to give away too much of the plot. (But if you skip to the last page you’ll see Primitive Pete escaping with his life.)

As someone whose primary interest is woodworking, I gravitated to the author’s section on carpentry tools. In the end, this section was disappointing because of its small scope: “nail” hammer, ripping bar, and hand saws. Yes, that’s all the carpentry tools.  To be fair some of the mechanic’s tools are also used by woodworkers. The information provided about the tools were helpful, and was even good for an experienced tool user for some reminders. Such as using an extra block of wood when removing a nail to give extra leverage and to minimize damage to the wood’s show face. And I liked the author’s explanation of how to tell the difference between a rip saw and a cross-cut saw without the need to label them. But it was three things!?! Only … three … things

Despite the importance of this text for all that is right and wrong in tool usage, it skips over the burning question of our time – imperial or metric? It states that the U.S. uses the imperial system and foreigners use metric, and provides a handy, dandy chart for conversion. The closest the  book comes to answering the question that divides us all is when it notes with no interpretation,

“The only standard of measurement that has been legalized by the United States Government (in 1866) is the meter.” (For those requiring assistance to deal with the shock, please call 1-888-555-WHAT?!?)

In all seriousness folks, as a primer for the use of tools, it really is second to none. The book takes a dry subject and succeeds in making it a tolerable experience and is a great teaching aid. Aided significantly by the Disney illustrations, without which I would have rated this book much lower. (Nice job, Walt.)  At the same time it is not a perfect text. It is certainly dated, for example it is focused on a standard screwdriver and gives only passing reference to the ‘recent’ innovation of Philips screwdrivers and other specialty screwdrivers. The use of Primitive Pete as an archetype will also cause issues for some. Lost in all the detail, and what I see as one of the text’s most important point is … when using tools, you don’t always have the perfect tool at hand and sometimes the craftsman “may have to break some of the rules set forth in this book,” and “the type of information in this book is no substitute for practical experience. The only way to find out about tools is to use them.” In other words, everything will be all right.  Be safe, be aware of a tool limitations, and be smart!

The “ABCs of Hand Tools,” because of its mass production (thanks GM and Disney) is not too difficult to find in the wild. You can pick up a copy between 99¢ and $8, as with anything condition will affect the price. But if you want an electronic copy, it can be legally obtained for free from General Motors’ Heritage Center website. Proving that big, multi-national corporations can do something nice once and a while. So, if you like

vintage tool books, “The ABCs of Hand Tools” would be a fun one to have in your collection. One final comment, at least until the next one, if you’re going to read the book, take the full experience and see the cartoon as well.

If You’re interested in the video version of this review …