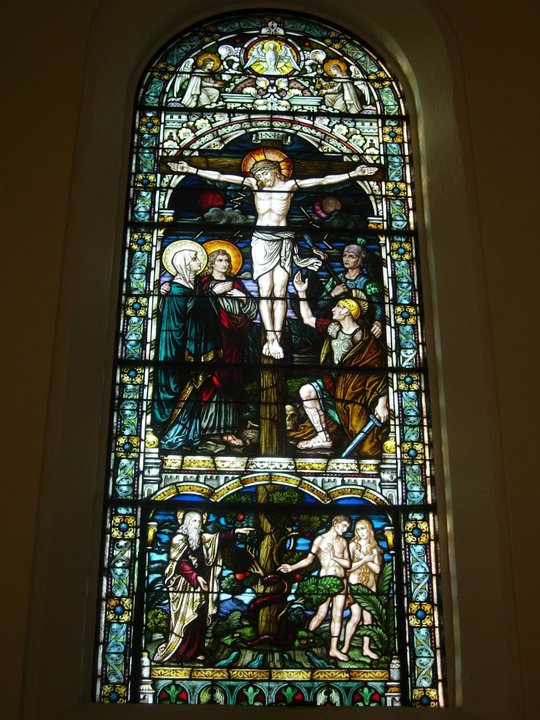 This year is my 10th anniversary of priestly ordination, or at least it will be on June 11.  Before I was ordained I spent 4 years studying at Saint Meinrad School of Theology and living with the monastic community there.  In the archabbey church there are many beautiful stained-glass windows.  One of my favorites was nestled on the northwest side, and we passed by it every time we went in procession into the church – the Crucifixion.  I had not seen the Crucifixion depicted in this way, and I have not seen it done since.  The upper part of the window has a traditional depiction of the Christ on the Cross with the Blessed Virgin Mary and St. John on one side with the now-believing centurion – St. Longinus according to tradition – kneeling and another Roman soldier observing on the other.  The lower panel, however, was the image of the Expulsion from Paradise of Adam and Eve.  Running through both images is the Tree of Life, the forbidden tree is the same as the Cross upon which Jesus hung.  What a powerful image!  Our greatest failures – turning from God and killing God – become the instrument of our salvation.  The Tree of Life finally came to fruition and now we can properly take from its fruit.

Another powerful crucifixion scene that caught my imagination when I was working on my thesis was an Old English poem, Dream of the Rood, which is a vision seen by the unnamed author.  He is visited by the Cross, and the Cross tells the tale of how it came to be.  It recounts how it was forcibly taken from its forest, transformed, and finally installed on the hill at Golgotha.  It learns that it was not destined to bear a lowly criminal but the Savior of the world.

The Cross had a new purpose, to stand strong and be the mount of Christ as He did battle against the forces of evil.  All the wounds inflicted on Christ were wounds inflicted on the Cross too.  The Cross, now soaked with the Blood of Christ and the standard of His Passion, is glorified by the action performed upon it and filled with power and healing.

The martial imagery evoked by this poem was not unique.  The Cross was seen as a great instrument of power, a medieval version of the Ark of the Covenant that the Israelites carried into battle as they took possession of the Promised Land.  Secular powers used the symbol of the Cross as their standards as they conquered rebellious people, carved new domains from other lands, or expelled those who refused to conform.  All echoed with the battle cry, “Deus vult!”  The Cross was power, but power was understood, then as today, as controlling other people.  It should not surprise us then, that in certain parts of the world (or among secularists) the Cross is seen as a symbol of oppression rather than redemption.

What is the Cross?  At its core it was an ordinary piece of wood.  Yet that which was ordinary was transformed into something greater.  Amidst all the martial imagery in Dream of the Rood there are a few important lines that are easily overlooked.  The Cross is explicit in where its power lies, “Therefore I, glorious now, rise under heaven, and I may heal any of those who will reverence me.” (vs. 84-85)  It does not conquer territory nor is it a totem for victory in battle, instead it’s medicine for a sick body or soul.  The victory is over sin and death. 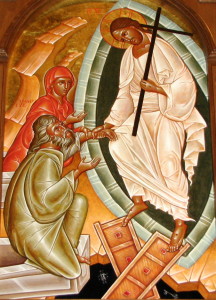 Eastern Christian iconography prominently portrays this truth in the icon of the Resurrection.  Christ carrying his cross – his standard – breaks down the gates of Sheol and lifts Adam and Eve from the underworld so that they may enjoy eternal life in heaven.  Before the vision ends and the dreamer awakes, the Cross commands that the seer tells of what he has seen so that all may glory and hope in the healing power of the Cross.

The sacramentality of these early Christian images have a great resonance.  God using the ordinary, using the material and transforming it into something greater, sanctifying it, perfecting it.  I think that is the message of the Cross.  It made me and it made you greater than what we allowed our appetites to create within us.  As Christians we were commanded to take up our own crosses and follow in Christ’s way (cf. Matthew 16:24; Luke 9:23).  So doesn’t that mean that we have to get a little bloodied and battered about in the process of our transformation?  Growth has never been an easy process, but seeing that we are not forsaken but loved and wanted by the One who gave to the last measure gives us the strength to persevere.  We now bear His name.  Doesn’t that mean that we are called to be standards of power and healing?  Not the control and domination of the past, but of the transformative power of salvation and healing.

The Cross – a few pieces of lumber – is the instrument of salvation.  We – simple, broken, sinful individuals – are called to be instruments of salvation too.

Article Name
The Wood of the Cross
Description
This year is my 10th anniversary of priestly ordination, or at least it will be on June 11. Before I was ordained I spent 4 years studying at Saint Meinrad School of Theology and living with the monastic community there.
Author
Fr. Thomas