A few years ago, one of my brother-monks asked me if I was willing to make a tool rack for him.  It was a simple enough request.  He is the monastery gardener, and so he has some hoes, a few shovels, a pick or two, rakes, and a variety of odds and ends.  I knew where he kept them in the abbey garage.  They weren’t what you would call in the way, but they were not out of the way either.  At some point he had begun the project, taking a big piece of 3/4″ plywood and started hammering nails into it.  Not a bad idea, and in fact is probably what I would have done if I took the assignment.  As I said, he had started it but not completed it.  Several of the tools were awaiting their allotted position and the plywood wasn’t mounted to the wall, just leaning up against it – between one of the cars and the northern wall.  I asked him, I know you started the project – I didn’t add 10 years ago because I have been guilty myself of beginning a project and not finishing it, just ask my parents about a manure spreader I planned to refinish in John Deere colors back in 8th grade (on second thought, don’t ask them) – but why didn’t you finish it.  His response was that it wasn’t worth his time.  Needless to say I didn’t accept that commission, “Ask the abbot and if he says it is okay I’ll do it.”  I never heard from the abbot.

That’s the thing about woodworking, people hear about our little hobby, and the next thing you know people are asking you to build anything from a pencil holder to a dining room table. 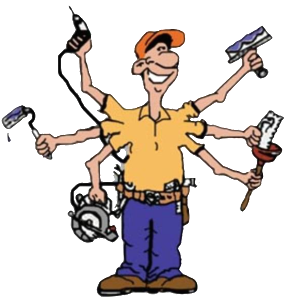 Though I do not have personal experience, I am pretty sure there are also quite a few spouses who say, “Honey, can you …”  And to keep the wife (or husband! – shout out to female woodworkers) happy, woodworkers are glad to oblige.  Anything to give us an opportunity to get out into the shop.  Oh, we might hmm and ahhww for a little while to give the illusion that it is a pretty big favor they are asking, but I for one am usually doing my darnedest not to come across as a giddy child on Christmas when asked to build something.

So there is the Honey-Do List, or in my case the Monkey-Do List, but we woodworkers also have those projects that we want to do for ourselves.  In fact, my guess is that 99.9% of those projects for ourselves are shop related (clamp rack, shelves, outfeed table, etcetera, etcetera, etcetera).  So what do we do?  I’ve got the Monkey-Do List and the Me, Myself, and I List; and after thousands of years of evolution, human beings have still not figured out how to add one more second to the clock. (Or have we?!?)  Too many things and too little time.  Its about prioritizing.  What needs to get done?  If the wife’s birthday is next month, and she wants a new bathroom vanity?  Top of the list!  Otherwise rank them, and don’t be afraid to modify the list rankings as time passes.  Remember its two separate lists with two separate rankings.  Keep yourself motivated and go back-and-forth between the lists.  One from Monkey-Do, then one from MMI.  Monkey-MMI, Monkey-MMI.  You get the drift.

The best part of it is that I don’t have to feel guilty about working off the Me, Myself, and I List at all. 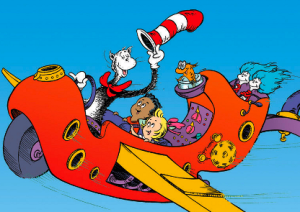 Why?  Because it is for the shop!  No, I don’t mean we justify it by saying having this thingamajigger will help me create better projects.  Its experimenting!  Its the perfect time to try out new ideas and new techniques.  Want to try a new finishing technique?  It

work the first time on that new front porch swing, but why not try it first on some shop cabinets.  Want to make a jewelry box with hand-cut dovetails, why not practice on the under the workbench drawers?  People aren’t naturally born woodworkers, we have to practice.  AND WE HAVE TO PRACTICE ALOT!!!  There aren’t too many people we allow into our Fortress of Solitude, um I mean workshop.  So its there that we can try, practice, screw-up and live with it because people won’t see it.

Alright, Time to Turn This 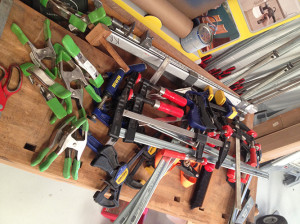 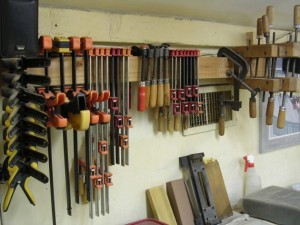 Or Maybe with Keyed Tenons?