On the first day of the month of November, in the year of Our Lord, two thousand and thirteen at 1:01pm, central daylight savings time, the first ever MonkWerks video was uploaded to YouTube – and he is still as melodramatic as ever.  So Happy Anniversary!  If you will indulge me for a minute – as if we have a choice – I would like to do a little reminiscing.  Though it is often said, it is unbelievable the experiences I have enjoyed during this solitary year.  I have interacted with some really interesting, creative, and wonderful people from all over the world.  People from every continent (save Antarctica) have watched my videos –

speaking of net neutrality, when are the penguins going to have affordable and reliable, high-speed access to watch YouTube – and that is a humbling thought.  I have interacted with some of my favorite woodworkers and have been an occasional guest on the Summers Woodworking Show – did you know he actually tried to add that to his curriculum vitae (that’s C.V. for those that don’t know Latin).  And I think the best part has been able to talk about woodworking with so many people, and as if I have not said it enough … the online woodworking community is great!  I suppose I should mention that I received some great news today (surprising that it happened on the one year anniversary), one of my videos has topped 10,000 views!

For those who like numbers here are some of the statistics: 22 videos created; 12 projects – he’s including the unfinished Shoe-Shine Box, get that done will ya; 2,810 subscribers; 59,912 views 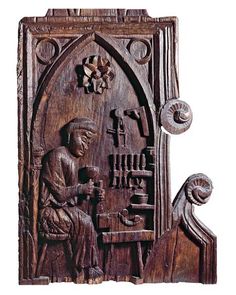 (2636 of those views were by women); 281,356 minutes of video watched; videos seen in 151 countries (there are 196 countries in the world); 2,426 likes and 13 dislikes – you can thank us for yanking the “Shake It Off” video link; and 680 comments.  Not bad for the first year, and all of it is because people (you guys and gals) were interested in seeing what a monk in a woodshop likes to do in his spare time.

And so to everyone who has watched a video or read a blog posting, a sincere and heartfelt thank you for making this past year so great.  And now to the next project.

Article Name
Happy Paper Anniversary! Paper, Really?!?
Description
On the first day of the month of November, in the year of Our Lord, two thousand and thirteen at 1:01pm, central daylight savings time, the first ever MonkWerks video was uploaded to YouTube - and he is still as melodramatic as ever. So Happy Anniversary!
Author
Fr. Thomas