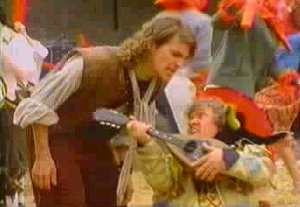 Perhaps my woodworking videos have not yet garnered enough attention, but I haven’t been inundated with comments on safety.  I’m pretty sure its not because I follow all the safety procedures!

I sometimes forget my safety glasses until a piece of sawdust gets in my eye or I don’t wear the respirator because it makes my beard look funky afterwards or I rarely wear hearing protection because I just don’t have a good system. (Besides some of the music to which I listen or have listened reach decibels far higher than some of my tools can generate.)  Is it an excuse?  Yes.

Over the last several years, I’ve heard many online woodworkers advocate the position of Mike Rowe, “Safety Third.”  The basic premise is that corporations are not primarily interested in your safety but profit (This is ‘MERICA after all

).  So the person primarily responsible for your safety is YOU and my safety is ME.

I believe it was Steve Ramsey who said that if safety was our number one priority we would never build anything because there is always risk when we deal with sharp daliwacks.  (I added the “daliwacks” part, not sure if Steve would ever use such a word; he is more highbrow than I.)  Bottom line – know what you are comfortable doing and not doing.  I’m not wearing a hazmat suit or chainmail, so I am personally willing to accept some risks.  (Though I think those gloves and the extra weight might get in the way and cause the task to be more dangerous.  But what do I know, my degrees are in theology and history, NOT safety.)

That doesn’t mean that sometimes I can’t be an idiot, which is the point of this post.  I DID SOMETHING STUPID.  No, I did not chop off a finger, or suffer a board to the groin because of kickback, or do something that we normally associate with woodworking injuries.  I tried to do it alone.  My last two videos have been on clamps, and I have been watching a lot of them the last few months.  I also found a source that purchases surplus woodworking tools and sells them at great prices.  My clamp collection has grown, therefore, tenfold.  As I mentioned in my last post, I was planning to build some racks.

The shop I use has cinder and ceramic blocks for the walls, making installation of wall mounted – anything – difficult.  Having watched Jay Bates’ last 5 videos/articles on French Cleats for shop storage (Finishing Supply Rack, Square Holder, Saw Blade Storage, Hand Tool Holder, and Pocket Hole Drill Charging Station), I thought of …  You guessed it, French Cleats.

After that many project on French Cleats, I think the French Ministry of Culture should fly Jay and his wife to Paris for a get away  … as long as Church Norris doesn’t mind.

I thought what a great idea to make it a larger area, and I could then hang the cleats on the plywood and save myself a lot of drilling into masonry.  So I picked up a new masonry bit from the local hardware store, some masonry screws, and some “construction adhesive.” Why can’t I just call it Liquid Nail, that’s what I bought?!?  Here’s where the problems started.  The new top piece of plywood is 48″x32″ and the bottom piece is 48″x22″.  By themselves they are not large.  And by themselves are not difficult to handle.  Holding them up covered with Liquid Nail, drilling through masonry, and then attaching it to the wall with screws IS.  It was one of the most physically demanding jobs I had ever done.  And that includes the time I single-handedly moved a 1950s-era, DeWalt 20″ radial arm saw.  I threw my back out on that one.  And yes, it was another stupid mistake, but lets not dwell on it.  Well … I suppose that is the purpose of this post.  I didn’t hurt myself in the sense of falling off the ladder or dropping the plywood on myself.  But after TWO HOURS of attaching a board to the wall, I knew I had surpassed my limits.  I just hurt.  And why?  Because I thought I could do it myself, but in reality I couldn’t.

The moral of the story: What is more stubborn than an Irishman and a German?  A monk of German-Irish ancestry with a little Scottish thrown in.  Know your limits.  Then still proceed with some caution.  Oh, and buying a buddy a beer is a lot easier than suffering.

It Ain’t Pretty, But at Least Its Done 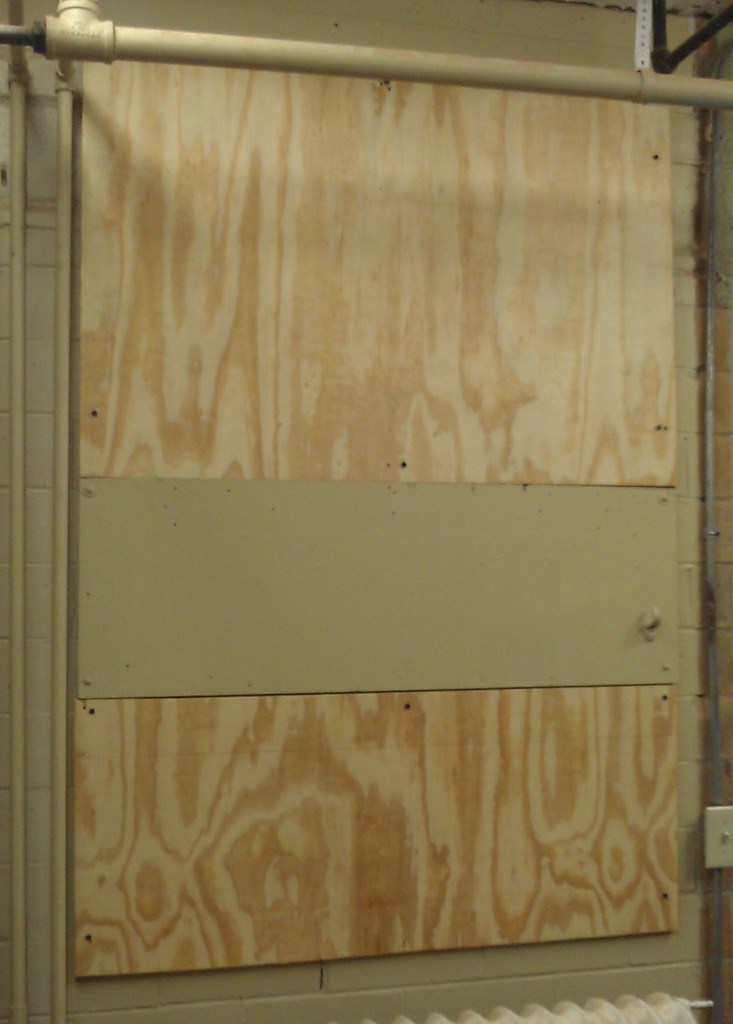